When John Slattery is standing in front of a giant screen, “neXt” is a pretty engaging television show. So it’s no surprise the new Fox drama chooses that way to open its pilot episode, with Slattery’s tech billionaire Paul LeBlanc speaking to a gathered group about the impending perils of innovation and how we’re all basically doomed.

“neXt” is A seriAl killer st0ry

What follows is a TV thriller centered on the hunt for an algorithmic super-intelligence; a self-learning program that the series’ main characters believe is murdering people to protect its secrets. In the process, “neXt” is a serial killer story and a detective show and a prophet of catastrophe, delivered together in one-hour chunks.

LeBlanc’s alarm-sounding eventually weaves its way into the work of Shea Salazar (Fernanda Andrade), leader of an FBI cybercrime task force based out of Portland. (Yes, they were on different networks, but just imagine the “Stumptown” crossover that now we’ll never get.) Along with a main trio of fellow investigators and experts, Salazar joins the effort to neutralize neXt, a pet project that originated at LeBlanc’s old company. As they all track this rogue AI across different networks, they’re left to convince a raft of skeptical gatekeepers that it’s only a matter of time before the mysterious deaths that befell some of their colleagues and acquaintances become a more widespread problem.

The strongest installment of the early bunch is the third, which finds the crew trying to find out how neXt might be connected to a New England research lab. The particular strain of techno-horror that greets them is a stripped-down expression of the nightmare hypotheticals that any video like this one can dredge up. It’s methodical and effective by virtue of recognizing what makes people inherently uneasy about expressionless and emotionless machine capability. 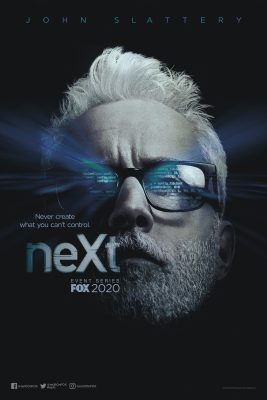 Where “neXt” loses some of that simplicity and precision is in trying to tackle the internet at large. Given trends and methodologies evolve rapidly, it’s hard to tackle something like the hive mentality of white supremacist groups while their real-world counterparts go after decidedly different targets. There’s also only so much real estate a show can cover about the internet’s darkest corners when what comes out of the mouths of the two main characters sounds to many they encounter like conspiratorial nonsense.

Even factoring in a few choices that feel out of step with certain online realities (when was the last time viral cellphone footage had full shot/reverse shot editing?), it’s impossible to ignore the way “neXt” taps into anxiety, specifically in seeing people try to track an effectively invisible killer. The idea of containing a potential lethal force in fits and starts without fully understanding how it spreads is terror enough; LeBlanc and Salazar don’t need to do much more than invoke it to give the show dramatic drive.

“neXt” is the network TV equivalent of those solid mid-budget thrillers slowly disappearing from multiplexes. Effectively managed in scale and scope, while utilizing some of its own limitations, “neXt” gets plenty of mileage out of not overburdening its protagonists. So far, they’re not asked to be action heroes — the excitement is built on intuition and instinct rather than brute force.

LeBlanc as a character is an interesting spin on the pop culture billionaire, too. While possessing all of Slattery’s innate charms, there’s a matter-of-fact way that LeBlanc uses his resources that doesn’t prop him up as an infallible financial savior. “neXt” is exponentially more compelling because he’s miserable. Not even a country-hopping AI goose chase can fill the gap in his psyche or repair his fraught relationship with daughter Abby (Elizabeth Cappuccino).

That mixture of LeBlanc’s personal and professional preoccupations takes up a decent chunk of the “neXt” energy, but LeBlanc and Salazar are effective co-leads. Slattery may be the draw for some corners of the audience, but this is not designed for him to front a Bruce Wayne-esque parade of superhuman gadgets and gizmos that are only at his disposal. Sure, there’s a self-aware dickishness to contend with, but “neXt” starts out on solid footing because LeBlanc and Salazar have a decent partnership that capitalizes on what’s at their respective disposals.

the eXcitement is built 0n intuiti0n

instinct rAther thAn brute f0rce

As the show moves beyond the opening five episodes provided to press, there’s room to find extra narrative footing for the rest of the task force. There’s one particular storyline that, as introduced in the pilot, was bound to rear its head as the season progressed, and how that thread connects to the show’s early core narrative is perhaps one interconnected step too far. With this many storylines already, things could get muddied if “neXt” piles on extra threats beyond its central one.

With a realization that getting LeBlanc in front of a giant screen to deliver some relevant historical antidote probably isn’t a viable way to structure a drama series, “neXt” does try to set aside at least one sequence per episode that veers away from the standard law enforcement/government agency office aesthetic. Glowing-red bathroom rage sessions, surveillance camera trickery, and a visualization of the neXt system’s monitoring function all give the show a chance to cut through the monotony of having to rely on people typing frantically at keyboards lit by lines of code.

With production demands and delays already fighting a show like this in equal measure (it was slated to premiere months ago), “neXt” is facing an uphill battle. Trying to make a series about the current dangers of technology, even without adding a wrinkle of villainous intent, is a game of narrative whack-a-mole. Given that, it’s surprising “neXt” ends up with as much potential as it has. Clearly, no one has any idea what the coming months will bring, so the more that “neXt” sticks to what it can control, the better off it should fare.