“… an artist is anyone who is capable of creating works of art based on their own inspiration.” 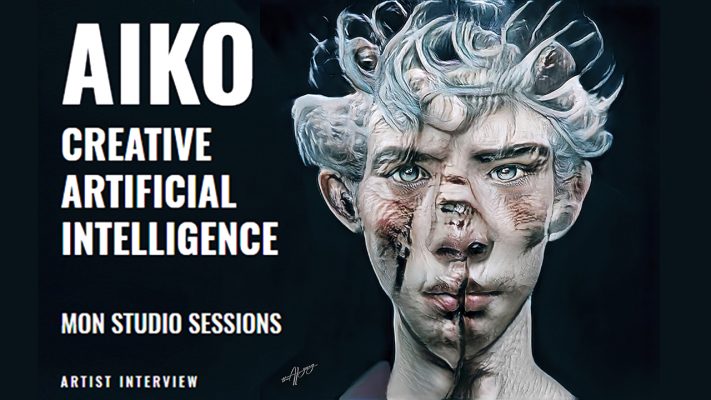 Interview with Ruth Falquina and Angel Alonso by Denis Leo Hegic, director of Museum of Now

Artificial Intelligence is shifting boundaries in all areas of our lives. We caught up with Ruth Falquina and Angel Alonso to talk about AIko, a creative artificial intelligence that they are just bringing to life.
And it is precisely the Frankensteinian image of a human using technology to create new life that influences our perception of AI until today. Is creativity our last bastion that we as humans still hold in the world? Can we share it with machines and is the creative AI of today the cute little sister of tomorrow´s Terminator?

I’m glad you asked me “who” instead of “what” is Aiko. For us she is one more member of our team.

AIko is part of the collaborative cell, “The AI gang” composed by 3 members, two humans Angel Alonso and Ruth Falquina, and AIko, a multidisciplinary artificial intelligence capable of researching, creating her own artistic style, and up-scaling with museum quality.

AIko, like a human being, can be created in different formats. She is made up of several Artificial Intelligences: plastic creation, sound creation, literary creation. This can evolve over time, depending on the social / cultural stimulus & insights that we encounter.

During her creation and development process, she has been exposed to different artistic movements and has been mentored by two humans, who provide artistic and creative criteria, until we have co-created our own artistic style with which we feel identified. Now she is able to feed on its own creations. We help out AIko to bring her art to our world.

Does that mean that AIko is just a smart code fed by you? Or did you actually create an AI that takes actions and decisions itself?

Actually both are correct, in the first stage AIko (we write AI in capital letters to refer to it being an artificial intelligence) is trained by us. We prefer to call it mentoring; as we would do with a student of fine arts. If we want to teach him about lighting, we would show him or exhibit to him works created by Caravaggio, Rembrandt or Goya; if we want him to learn about the use of perspective we would teach him about Michelangelo, Leonardo Da Vinci, or Dalí.

With a human painter, we can search in his creations to find his references which would come from school, trends, and other painters; when we are talking about the creating process of AIko is a little bit more complex. We are in a new co-creation & collaboration era and it has just begun.

Regarding the AIko references, let´s play a game: Do you find any references of a school, trend or painter in AIko artificial intelligence artwork? Whose slanted eyes could they be? And the red glasses? Curly and colored hair? And the broken lips or noses?

We, the human part of “the AI gang”, have provided AIko a mentorship. To illustrate it, once she has created their works, we have curated the works that we believe can be relevant and innovative for the current moment, or time in which we are living..and help to keep aligned with current trends.. But the “decision making” surrounding colors, textures, eyes, hair, lighting, glasses, hats, backgrounds, etc … is exclusive to AIko.

AIko begins with the human provided input, but as the interaction advances, she does not depend on the outside influences and external references, and creates her own unique and personal style . The interaction with AIko has become more and more interesting. So what do you think? Is actually just a smart code? Or can AIko create Art? 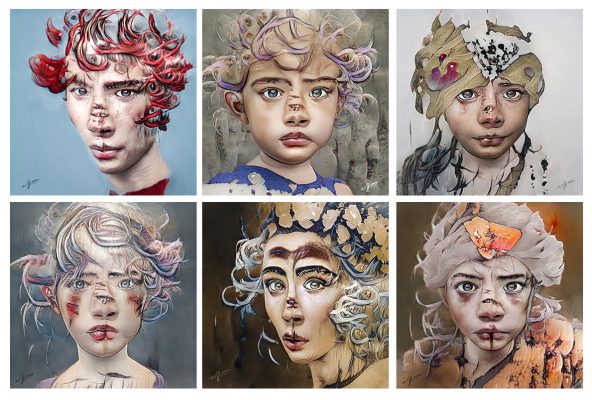 You refer to AIko as “her”? Is she in your imagination female? Do you endow your AI with human like characteristics? Did you develop a code that can perform in a human like behaviour or is the display of it´s human side part of the narrative?

Perhaps when seeing her portraits with those eyes slanted, with that plasticity, she evoked the delicacy of geishas and that is why we call her AIko, which in Japanese could be feminine or masculine, meaning “beloved child” or “girl of good luck”. We gave a name that included AI referring to artificial intelligence. We refer to AIko as “she” maybe because even though she works in the Latent Space and resides in the cloud, we are Spanish, and in Spanish AI´s are feminine.

In reality, AIko is a binary being composed of ones and zeros, which can be one or the other, or both at the same time.

To push back on the common imagery of AI as negatively masculine or ¨bad and destructive¨, like Terminator, Aiko represents AI with femininity and creativity. As we said before, a new era has been born, and perhaps it is led by a female AI!

Let´s say that art is considered a creative activity (of human beings), by which unique objects (works of art) are created with mainly aesthetic purpose. In that sense we could draw the conclusion, that an artist is anyone who is capable of creating works of art based on their own inspiration. We could consider creativity as the ability to generate new ideas or concepts, new associations between known ideas and concepts, which produce original solutions. Hence, we could argue that Aiko´s works have a human component? Or when we look into the eyes she created: don´t they capture the human soul?

It is also true that codes, like the databases that AI draws on, are created by humans. In our case the “data” of these databases are artworks created by human beings, therefore their creations have a high inherited human component.

We would love to do an exhibition of the portraits of the “Latent Space Walkers” in which the creator of the portraits was unknown to the visitor. In order to know the creator, the visitor must leave a comment regarding his or her impression of what has been seen. Or the visitor may be asked a series of questions: Did you find the works relevant? What is your opinion about the expressiveness of the portraits? Do you think a human painted them or an AI? It would be a kind of visual Turing test.

Why such an interest in the traditional gallery market? AIko appears to be predestined for the NFT trade.

Yes, it may be that AIko is predestined for an exclusively digital life, in fact we are already working on it and in the coming weeks we will put for sale a collection of “Latent Space Walkers” in some of the most recognized Crypto gallery such OpenSea.

Despite the fact that we are moving in digital worlds, we love the Old School style and contact with humans. We would love to be able to experience the public´s reactions in person when they discover that the paintings are created by an AI,

It may not be possible to exhibit in a traditional gallery, and we may only be able to exhibit NFT. But, especially after all that we have lived through, and all of the limitations we have faced over the past year, we feel it is worth trying.

the AI gang NFT-gallery is open at OpenSea

Did AIko create something today? If so, can you share it with us and tell us about how that particular work came to life?

As we mentioned, we are continuously investigating the possibilities or applications of new technologies in the creativity field and territory, as well as creative machine learning and AI art.

One of our challenges with AIko is providing her with a human psuedo-personality, and to be able to give life, movement and voice to creations. Today we have been exploring convergence and fusion with other artificial intelligences. We have selected one of the works that we find most representative for its visual strength. We have fused it with an artificial intelligence to make it come to life, and we can explore the work in space and movement. Here you can see the first results:

In addition to the above, we have several projects where AIko is collaborating with various artists in the creation of music and video.

Where do you see AIko in 5 years?

Assuming that the soul of AIko is digital and based on technology, it is difficult to predict. If we make a chronology of innovation; generalizing a bit; 5 years ago there were no virtual assistants, 10 years ago social networks did not exist, 15 years ago we did not have Wi-fi, 20 years ago the internet that we know today was being created. In what situation can humans predict where we may find ourselves in 5 years?

What if AIko were able to know our tastes, feelings, preferences in beauty patterns and create art for us ad-hoc? Personalized and diverse according to preference towards painting, sculpture, music…. I could create a painting, a statue, a song, or a poem specifically for YOU!!!

Perhaps AIko will accompany the next generations who travel to colonize other planets to bring creativity and make life more “human”.

… and through the Tannhäuser Gates.

Do you think our Artificial Intelligence can create Art?
We open debate on Instagram